The fourth instalment of the Integration Syndicate was themed “Building blocks of Integration” and aimed at identifying the critical elements of a successful integration approach at the local level. The starting proposition was that city-­‐wide integration is inconceivable without a means to effect integrative processes at the neighbourhood level, especially in the so-­‐called township condition. The focus was on two case studies of innovative local projects. Our assumption is that we need to draw from real-­‐life experiences instead of abstract conceptual frameworks.

The first is the Masibambane Secondary School in Bloekombos, Kraaifontein, part of the Tuba Mokote Programme and the second is the Reconstructing Living Labs (RLabs).

The school was developed, on an incremental basis, over a ten year period. Various stakeholders were involved; the CSIR (Council for Scientific and Industrial Research) provided funding to the tune of R2.3 million. Other funders included the Western Cape Education Department, Western Cape Department of Public Works and the surrounding community. The design and spatial intervention was driven by a group professionals from Nisa Mammon and Associates. The initiative demonstrates the importance of combining careful purpose-­‐driven design and effective community engagement processes so that both educational and community improvement dynamics can be achieved at the same time. The decade-­plus body of work was presented by Jacqui Perrin.

The main lessons highlighted were: 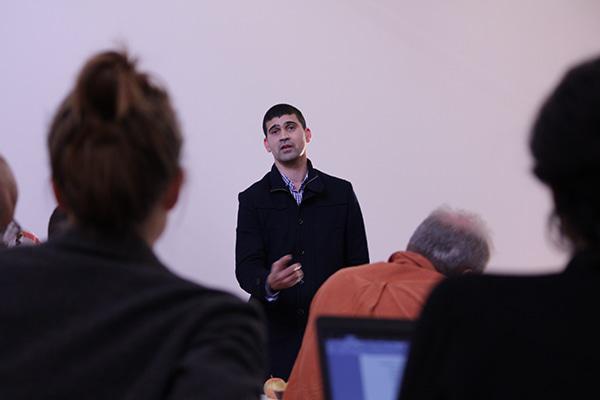 The founder of RLabs, Marlon Parker joined the Integration Syndicate and provided a spirited overview of the origins, evolution and ambitions of the organisation. RLabs is a social enterprise that operates in marginalised communities and one of the main goals is activation of public space through their Youth Café concept, in partnership with the Department of Social Development. These Youth Cafés are operated by “young people for young people.” RLabs strives to build capacity of the youth through 40 different, but contextually relevant training courses. In so doing, they instill hope, which they believe is the most important ingredient for activating agency and a sense of personal and collective responsibility.

More than 100 000 people have received training over a 7 year period, exceeding their wildest expectations when they set off on the journey. Through their Innovation Labs, participants are encouraged to come up with solutions to community challenges which they have identified as they understand their communities best and are therefore in a position to identify the most appropriate solutions. In this way, they become catalysts for change, with the support of RLabs. RLabs, in partnership with the private and public sector provides supportive space and other resources.

The presentations were followed up with small group discussions. Groups had to ponder and discuss the following questions:

1. What are the criteria for catalytic neighborhood level interventions that can catalyse community integration and empowerment?

2. How does one get the alchemy right?

3. How does one sustain and scale these initiatives to advance city-­‐wide transformation?

With regards to the first question, the following points were highlighted:

Galvanising around common tensions or challenges within a community and using some of this energy to initiate an intervention might be a good starting point. Finding alignment between different agendas in order to create a shared vision is important, but might prove extremely difficult to achieve. However one also needs flexibility to adapt the vision to changing contexts and dynamics. Another critical element is strong leadership. However, this needs to be leadership of a particular kind—i.e. able to activate energy and create synergy, and inspire. This insight comes back to the question, how does one nurture and support such leaders to emerge from poor communities?

In terms of Activation: It is essential to recognise and foreground pre-­‐existing resources and efforts. In order to do this, there is a need for data and information about what resources are available and leveraging what already exists and optimising it. This might also include, valuing that which is not normally valued. In doing so, one has to be cognisant of the opportunity costs of doing things differently. Another critical success factor for local innovation, is what was referred to as “white space”, the free labour and cross-­‐subsidisation which leave room and time for innovation and experimentation.

In terms of the scale issue, it was mentioned that there is a need to distinguish between scale and replicability. Replicability implies a model. Those elements which can be abstracted from the model and replicated must be identified. However, this requires deep contextual knowledge and understanding of local dynamics. RLabs appear to be what was referred to as a “social algorithm” which has been franchised. This raised the question of whether or not this idea of a social algorithm can be applied to broader structural challenges i.e. can you replicate this algorithm to eradicate poverty?

Another important point of discussion centred on incrementalism vs. a big project approach. Incrementalism and making small gains is important in order to show traction and inspire confidence. However, given the scale of need, and recognising the audacity of the Apartheid government to effect large-­‐scale change, there are questions about the dangers of remaining fixed on incrementalism. Maybe it is time to be more bold and ambitious? That said, it must also be acknowledged that even big projects have a built-­in dimension of incrementalism and experimentation.

In conclusion, it was agreed that the building blocks of integration probably involves, inter alia, a compelling narrative that drives innovation, rituals to build organisations as vibrant cultural institutions that instill deep emotional attachments, and capability (capacity and resources) to act with intent. The diagram offers a sketch of the core and enabling membrane of transformative grassroots action.