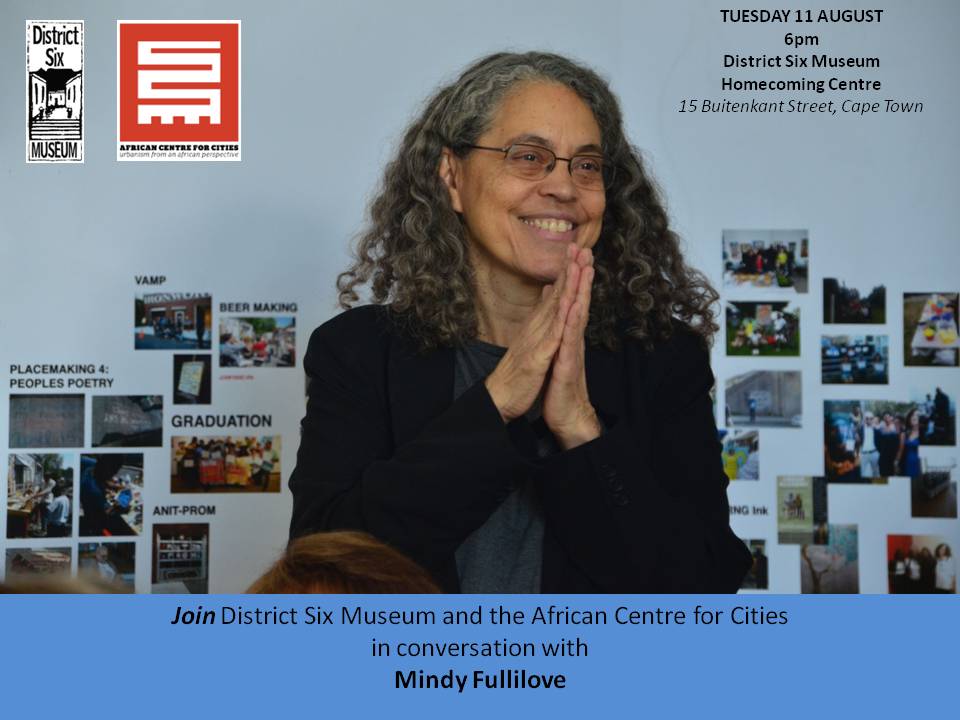 It is with great pleasure that the District Six Museum and the African Centre for Cities invite you to meet Dr Mindy Thompson Fullilove, visiting from Columbia University in New York. Dr Fullilove is a professor of Clinical Psychology and Public Health, and is interested in the links between the environment and mental health. She has researched, written and designed projects which speak to this concern, and is well-known for her critique as well as the development of various initiatives in New York and surrounding neighbourhoods.

In the introduction to her book Root Shock’, she writes:

“I present here the words of the people who have lived upheaval: the uprooted, the planners, the advocates, the historians. Read their words with care for them and for yourself. Read their words, not as single individuals living through a bad time, but as a multitude all sharing their morsel of the same bad time. Read in that manner and I believe that you will get the true nature of root shock. Read in that manner, and I believe you will be able to embrace the truth, not as a fearful thing, but as a call to join the struggle for a better tomorrow”.

Join District Six Museum and the African Centre for Cities  in a round-table discussion with Dr Fullilove during which time she will share with us some of the practical expressions of her work, as well as her impressions of the mental health of Cape Town as a ‘recovering’ city. Discussion to be led by Rike Sitas of the African Centre for Cities and Bonita Bennett of the District Six Museum.

Dr. Mindy Thompson Fullilove is a board-certified psychiatrist who is interested in the links between the environment and mental health. She started her research career in 1986 with a focus on the AIDS epidemic, and became aware of the close link between AIDS and place of residence. Under the rubric of the psychology of place, Dr. Fullilove began to examine the mental health effects of such environmental processes as violence, rebuilding, segregation, urban renewal, and mismanaged toxins. She has published numerous articles and six books including “Urban Alchemy: Restoring Joy in America’s Sorted-Out Cities,” “Root Shock: How Tearing Up City Neighborhoods Hurts America and What We Can Do About It,” and “House of Joshua: Meditations on Family and Place.”