A Brief Symposium on Accessing Land in African Cities 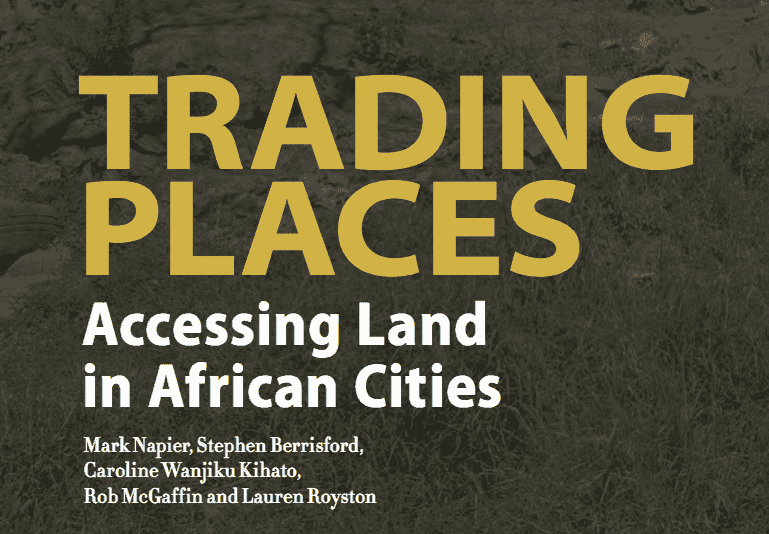 A recently released book called “Trading Places” is about how urban land markets work in African cities. The book explores how local practice, land governance and markets interact to shape the ways that people at society’s margins access land to build their livelihoods.

Given the challenges of poverty and inequality in many African cities, the authors argue that the problem is not with markets per se, but in the unequal ways in which market access is structured. Three of the authors, Rob McGaffin, Stephen Berrisford and Mark Napier, will discuss the emergent findings of their investigations into different dimensions of the challenges faced by people accessing land in rapidly urbanising centres. Following these short inputs, a facilitated discussion will be led by Liza Cirolia from the African Centre for Cities – Human Settlements CityLab.

Note: this symposium does not replace the official launch which will take place later in the evening at the Book Lounge. Rather, it seeks to offer a platform to critically engage with the issues and ideas brought forward by this book. There will be a limited number of discounted copies available at the symposium.

ABOUT THE SPEAKERS
Rob McGaffin is a town planner and land economist. He currently lectures in the Department of Construction Economics and Management at the University of Cape Town [UCT] and is a Mistra Urban Futures Researcher with the African Centre for Cities. He is the course director for the Housing Finance Course for Sub-Saharan Africa run in partnership between UCT, The Centre for Affordable Housing Finance [Finmark Trust] and the Wharton School of Business [University of Pennsylvania].

Stephen Berrisford is an independent consultant specialising in the legal and policy frameworks governing urban land and development. He is trained as a lawyer and urban planner, with degrees from the Universities of Cape Town and Cambridge. He works primarily in Southern and Eastern Africa as well as on global initiatives for agencies such as UN-HABITAT, Cities Alliance and the World Bank. Stephen is an Adjunct Professor at the African Centre for Cities at the University of Cape Town and Visiting Professor at the University of the Witwatersrand.

Mark Napier is a Principal Researcher in the Built Environment unit of the Council for Scientific and Industrial Research (CSIR) based in Pretoria, South Africa.  He is an architect by profession, with a Masters and PhD from the University of Newcastle upon Tyne, UK. As part of his twenty years’ policy research experience, Mark spent two years in national government, setting up a research unit in the Department of Human Settlements, and seven years managing the Urban Land Markets Programme Southern Africa.