The challenges of spatial segregation, inequality and exclusion remain a stubborn and enduring feature of South African cities. Despite the formal end of apartheid spatial engineering, spatial inequality continues within the constraints of private property, the existing real estate market, and public policy (even if arguably well-intentioned).

This persistent urban form has given rise to a series of public campaigns, most notably Reclaim the City, around issues of gentrification and affordable housing in areas such as Salt River and Sea Point. Within this context of ferment, the African Centre for Cities (ACC) in collaboration with the Poverty and Inequality Initiative (PII) at the University of Cape Town (UCT) has launched a year-long ‘Integration Syndicate’.

The initiative is supported by the Cape Higher Education Consortium (CHEC) and co-convened with the Centre for Humanities Research (CHR) at UCT and the Centre for Complex Systems in Transition (CST) at the University of Stellenbosch. It entails a series of 10 theme-based ‘episodes’ that will unfold over the course of the year, to explore the obstacles and solutions to social-spatial integration in the Cape Town metropolitan region.

The participants are a fixed group of leaders drawn from the public sector, social movements, NGOs, academia, and the private sector. According to Edgar Pieterse, the director of the ACC and key figure in the conceptualisation, “the intention behind the initiative is to create a public discourse on some of the key challenges faced in the City of Cape Town, to build a different kind of conversation on integration, and commit to get to the bottom of the stubborn obstacles to integration in the City of Cape Town”.

The first episode was hosted on 6 April 2017, in the heart of the District 6 Precinct. The discussion; facilitated by Edgar Pieterse; centred around the questions: Why Integration? What is Integration? Can it be achieved within the next generation? This first meeting served to introduce the diverse group of participants; make apparent the objectives of the year-long process; and open the dialogue.

Pieterse kicked things off by proposing entry points for the engagement, including the Built Environment Performance Plans (BEPPs) as an existing articulation of an urban vision, which arguably merits deeper scrutiny. Added to this, he identified the significance of adopting an historically aware approach, economic lens, and clarifying a framework for place-based action. With these in mind, he added that the idea “is to explore the various issues that shape and impact the spatial dynamics and prospects of Cape Town”. The process will involve the development of an Integration framework to be brought into conversation with three sites, already high on the priority list of the public sector within the City of Cape Town, – Two Rivers Urban Park, Philippi TOD and Belville TOD – culminating in a revised Integration Framework.

Following an initial framing and facilitated group discussion to tease out participants’ expectations of the initiative, the documentary “Decent Housing for All” was screened; created by the NGO ‘War on Want’, in collaboration with the ‘Housing Assembly’, a local social movement.

In reflecting on the documentary, participants’ responses were wide-ranging including an identification of the re-emergence of activist discourse from the 1980s in the language of the Housing Assembly; questioning the notion of a housing crisis given empty buildings in the city; and the impact of spatial inequality on the material and mental existence of the urban poor. 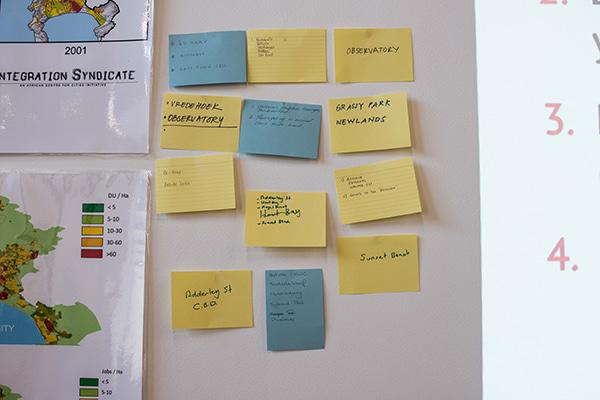 The final input for the evening was once again lead by Pieterse, offering a foundation for the year-long Integration Syndicate. In so doing, a key argument he proceeded to advance is that Post-Apartheid urban policy is defined by a spatial paradox, where increased spend on low-cost housing has served to accentuate spatial inequality. He also highlighted the profound dissonance between the public structure and the demographic makeup of the city, which has undergone profound change over the last 20 years.

In offering a representation of the typical South African city Pieterse outlined the Majority city (townships), Elite City (suburbs) and a marginal intersecting space termed the Mixed City. He proceeded to argue that the current financing model linking the Elite and Majority City as produced something of a Faustian Pact where public services are being provided, but a fundamental transformation of economic conditions is not being realised. Thereby arguing that the basic needs agenda drives public investment but reinforces inequality.

In response to this analysis of the ‘Spatial Paradox’ he proceeded to propose a deeper scrutiny of the BEPP and latest thinking intended to focus investment in the city through Transit Oriented Development (TOD), and thereby enlarge the ‘Mixed City’. Asking, “Will this resolve the profound complexity of the city?”; Pieterse concluded his input for the evening, by putting forward a proposition on the ‘What, Where, and How’ of urban transformation; including the significance of a critical “black mass,” foundational security and economic empowerment. 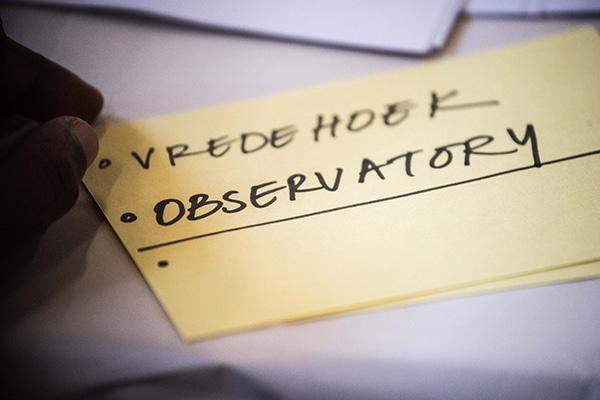 Another central proposition advanced is that we are currently faced with a problem of ‘Technocratic Denialism’, or ‘Planning without ‘gees’/’spirit’. In response, he provided a range of suggestions of whatmight constitute the antidote to this phenomenon, including Criminalising NIMBYism, and pursuing Social Housing by private sector as the norm. With respect to TOD as a vehicle for Integration, he argued for a model that looked “beyond red lanes and fancy buses”. A further provocation was the advancement of a Majority City agenda, that can reimagine the township as the real city.

Finally, in response to the question of ‘How’ to achieve urban transformation, he suggested the building of Coalitions, and a handful of high impact projects to rally the city, where the BEPP offers valuable entry points. In conclusion, he stated that “Where we are now and current propositions (public policy) won’t get us there”, highlighting the need for a structured conversation on the question of spatial integration; which the Integration Syndicate aims to facilitate.

Discussion points from participants:
• If we consider the scale and complexity of the development challenges in Cape Town, one has to ask whether the acupuncture approach (intervening in discrete strategically located sites) implied by a Transit-oriented development (TOD) approach is sufficient. Should we not consider intervention that are more ambitious in terms of scale the extent of delivery that can be effected? For example, the TRUP site, combined with the Pinelands and Mowbray golf courses and the Athlone Power station site gives one that sense of scale as reflected in the earlier work of the Density Syndicate.
• A related point was made that true TOD enables innovative fiscal strategies such as land value capture, which means it is possible to continuously invest in a more holistic approach to development that enables the creation or expansion of social development infrastructure such as schools, small scale business incubators, cultural infrastructure, public space, green infrastructure and so forth. In other words, one can envisage investments that is not about a building and mixed-income housing but much more dynamics micro settlements that over time manifest as dynamic and always changing communities. A related point was made that we need to better understand the implications of a public investment approach that is tilted towards an equitable distribution of resources (breath) versus a more targeted investment (depth) approach. Both have their pros and cons but one cannot delink an understanding of what to do from thinking through the financial implications.
• Several participants reinforced the idea that there is a complex set of political dynamics to better understand and name if integration is going to be advanced. One dimension of this is to develop an understanding of the cultural political of recognition. That is to say, it is important to appreciate that there is a multiplicity of people, groups, networks, initiatives beavering away at various aspects of the larger puzzle of social and economic integration in the city, within a larger commitment to social justice and sustainability. One should be very careful to only notice and validate the actors and actions that correspond with one’s own political values and preferences for how change comes about. One the challenges of future episodes will have to be to remind ourselves of the plurality of actions and the need to explore how these disparate “dots” of action can possibly be connected, or at least articulated in one form or another. ¹
• The targeted approach of the TOD model embedded in the Built Environment Performance Plan of the City of Cape Town seeks to incorporate social (rental) housingopportunities in the future development plans of these areas. However, it is important to also apply our minds the stored-up potential of informal rental markets in the form of backyard shacks (±80 000) as potentially the most important driver of another kind of integration that can enhance the economic viability of township areas.
• In the framing presentation for the session a point was made it is important to recognise the imperatives of “foundational security”, meaning-making and pleasure (see figure) for all people irrespective of where you live, your identity or stage in life. An important part of the larger integration agenda is making townships truly liveable and places where wellbeing can be realised. However, an observation made that the dimensions of foundational security seem to mimic the sectoral organisation of the state into silo departments, which points to the complexities of government working in a joint-up manner to deliver services that reinforces place-making and cultural pride. This point was not developed further but will undoubtedly be returned to in future episodes when we explore specific sites of integration in the city.
• One participant asked us to reflect on the imagination of integration that is implied when we invoke this trope. More pointedly, it was asked: In whose image is the ideal of living together (in difference) invoked or projected? This critical questioning will have to accompany the collective exploration over the course of the ten episodes.
• Another caution was the importance to avoid an approach within which art is instrumentalised as being able to accurately reflect the social imaginaries that might have to precede an form of meaningful integration. Art is an important aspect of building a fuller and more contradictory account of what prevents and enables integration, but it cannot offer simple answers to immensely complex questions.
• The final comment of the evening extended this latter discussion, adding that “It is not necessarily the narrative that needs changing but the social imaginary. You have to change the social imaginary to normalise living together”.

1 This might be a useful consideration to inform future reflections on how to structure the public event in March 2018.