HOW DO THE CITIES WE LIVE IN SHAPE WHAT WE EAT?
This question is central to a new book, Tomatoes & Taxi Ranks: Running our Cities to Fill the Food Gap, by Leonie Joubert with Jane Battersby and Vanessa Watson published by the African Centre for Cities.

There is an ocean of invisible undercurrents that tugs us this way and that in today’s urban food system; forces that nudge us subtly as we decide what type of food we’ll lift from the food seller’s shelf or stall: will we choose the tomato over the maize snack, and why do we make our decision? Will it satisfy our hunger, and will we be well nourished over time? 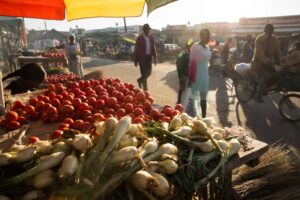 Tomatoes & Taxi Ranks specifically looks beyond the fresh produce that leaves farmers’ gates, and considers how that food gets from the farm onto our plates. It looks at the many forces and agents that shape how much that food eventually costs, and what form it takes when it reaches our dinner table. And it explores whether this food ultimately satisfies our hungry and our nutritional needs.

The book is based on research conducted by the Consuming Urban Poverty team comprised of urban geographers, sociologists, economists and planners from the African Centre for Cities (ACC) at the University of Cape Town, Copperbelt University in Zambia, the University of Zimbabwe, and the Kisumu Local Interaction Platform (KLIP), in Kisumu, Kenya. 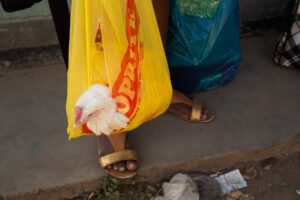 Tomatoes & Taxi Ranks, illustrated with evocative photography by Samantha Reinders and Masixole Feni, distills the research into a digestible read and is published alongside the academic book Urban Food Systems Governance and Poverty in African Cities (Routledge, 2018) edited by Jane Battersby and Vanessa Watson.

“Tomatoes & Taxi Ranks takes research from a three-year project on urban food security in sub-Saharan Africa and makes it accessible to a wider readership of policymakers, practitioners and the general public interested in urban issues,” says Watson. “The book is published in both hard and soft copies and is complemented by a dedicated website and animated videos to encourage its use in presentations and curricula.”

Tomatoes & Taxi Ranks debunks some of the stubborn misconceptions about how cities keep themselves well fed and well nourished, and considers how to create a more sustainable and equitable urban food system, particularly for those trying to survive close to the breadline. This book is written for anyone interested in creating sustainable, fair cities on the African continent.

Both Tomatoes & Taxi Ranks as well as Urban Food Systems Governance and Poverty in African Cities are available as Open Access downloads from www.tomatoesandtaxiranks.org.za

Hard copies of Tomatoes & Taxi Ranks are available from The Book Lounge, Cape Town. All proceeds of the book will be donated to The Book Lounge School Library project.

I am an urban social and cultural geographer with ongoing research interests through Urban Food Security as part of the CIDA funded AFSUN programme (AFSUN website) and the Formas funded 'Ways of Knowing' project, which aims to use interdisciplinary approaches to reflect on the values inherent in the management of green spaces in urban areas. I am also a member of the SANPAD-funded project, "Healthy Cities for Children" with Children's Institute at UCT.
View all posts by Jane Battersby