Episode Two of the Integration Syndicate explored the role of history – and different forms of storytelling – in producing particular kinds of narratives about Cape Town. The sessions started with just that – a series of personal life stories of participants that weaved the everyday, the political, the social and the spatial histories of experiences in, around, and in relation to Cape Town. For many participants, life started in relatively homogenous neighbourhoods and schools, and this gradually shifted towards intensifying intercultural experiences. From churches, cinemas and street-corners; through Hip-Hop, jazz bands and Bruce Lee; to gangs and security police; the process of storytelling revealed how all our lives intersect with histories in ways that are not always reflected in dominant urban narratives.

An overwhelming sense by participants was that Cape Town – despite its best attempts at place branding – has a fragmented, contested and disjointed identity. Cape Town has explicitly embraced the identity of the ‘creative city’ through Creative Cape Town. It has also capitalised on natural beauty and environmental and cultural destination marketing has been successful to draw many tourists into the City Bowl and southern suburbs. Although the creative city narrative has found traction in design circles, and the city attracts numerous local, regional and international tourists, its identity does not reflect the reality of the majority of Capetonians. Some participants felt that the disjuncture between the outward branding of the city and the reality of urban identities present across the city is an autocratic form of neglect, masking the alienating effects of violence, crime and conflict. Telling stories about our individual and collectives pasts and present makes this immediately evident – the traumas, invisibilities and erasures are revealed.

Neither the uninhibited optimism of the outward-facing marketing and the apocalyptic despair of the included/excluded divide are helpful in re-thinking what the narrative of the city is or could be. In order to propose an alternative way of thinking through the narrative of Cape Town, Professor Premesh Lalu, Director of the Centre for Humanities Research, at UWC provided a series of metaphorical lenses. 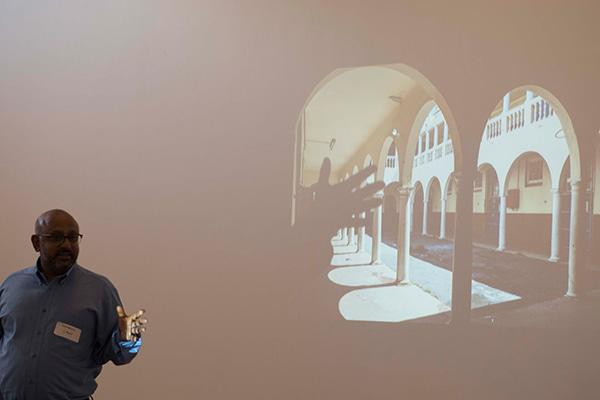 Lalu started by cautioning about the overarching tendencies of political economy narratives, suggesting that this approach leads to stasis – ‘ending in pitfalls of self-pity and self-erosion’. These approaches can result in repeating notions of difference that may be unhelpful. He asks if there are other concepts of difference that do not repeat injustices of the past? He proposes a new concept of history encapsulated by the idea of ‘Aesthetic Education’. Informed by Bashir’s connection between art history and politics, Spivak’s aesthetic education and entanglements, and Stiegler’s considerations of technics and time, Aesthetic Education explores the role of learning, politically – stretching Freireian learning for liberation.

He gave an example of bioscopes in Athlone as a way of ‘doubling’ in Freud’s imagining – where the ‘double future’ (as locals say) replaces the ‘double feature’ in provocative ways. The bioscope, not only in Cape Town but across the country and continent, has been a powerful ‘cross-over space’ that has been under-explored – an ‘unspent potential’ in the production of narratives about South African social, economic, spatial and political history/histories. Cinemas are also spaces of the suspension of reality – otherworlding: revealing worlds that lie beyond the immediate everyday life and city.

Metaphors from cinema – or cinematic formations – provide useful ways to illustrate a generous politics within everyday practices over time. It is in this cinematic formation that signals a reorganisation of memory, the imagination and technology. Lalu argues this reorganisation can reveal a ‘liveable post-apartheid that is desirable’ in ways that current narratives are unable to do. Reprioritising memory has an important temporal dimension – it reminds us to think over different time periods in contradistinction to the specific temporality of an apartheid-centred account of history. With memory, duration matters, and may be a better way to hold onto urban narratives. Intervals – as with the cinema – provide a pause to stop, think, absorb, providing opportunities for new temporalities.

And as Lalu exclaimed ‘if we think we can only build out of urgency, we will only build castles in sand.’

Conventional historical writing has become increasingly repressive of historical narratives argues Lalu. The form of historical writing is distanced from the storytelling that it emerges from. He therefore argues to reprioritise imagination. For example, thinking about historical narratives through cinematic formations, opens the imagination and allows for a suspension of the real, the rational, the now, the then – and can coalesce around new forms of worldly criticality.

Finally, he argued to steer away from the nightmares and apocalypses of technology, and rather to think how technologies can be harnessed for producing, recording, exploring and creating new forms of localised critical enquiry. He provides an example of digital arts-based practices – from recordings, to film, to puppetry. The practices of the Handspring Puppet Company in Barrydale served as a wonderfully evocative example of this point. 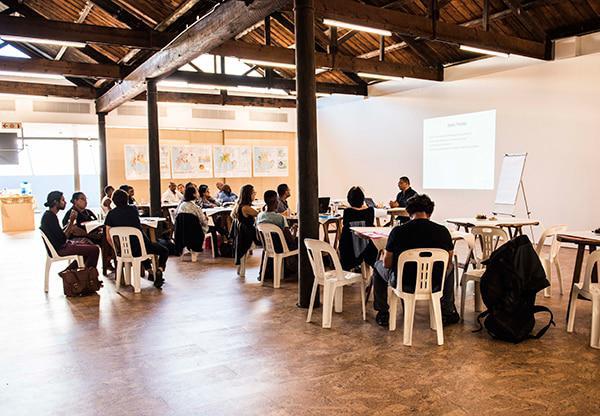 Professor Edgar Pieterse opened the plenary discussion by reasserting the importance of finding new ways of keeping the long view in sight and mind. Three discussions emerged out of the plenary. The first considered the nature and role of monuments and memorials. For the most part these tend to be monuments to atrocities – ahistorical objects, fixing history under particular narratives of heritage that are largely informed by an excess of memory or a death of memory. Re-thinking memory, imagination and technology can enable new forms of more flexible monumentalisation that incorporates and reflects multiple voices, spaces, scales and temporalities.

The second discussion was around the role of learning. For Lalu, there are no spaces for cross-over in schools and curriculum – especially in neighbourhoods with no resources for arts, culture and technology. He sees schools and libraries as a vital opportunity of unspent potential in developing more appropriate narratives of and for Cape Town. He offers the idea of learning to learn through Aesthetic Education in order to think together, across generations.

Finally the concept of crossovers was explored. Spaces as crossovers such as schools, libraries and cinema making itself (the example of screen and citizenship in Nollywood came up). Crossovers are simultaneously spaces of friction, risk and uncertainty as they are generative and productive spaces for new encounters of memory, imagination and technology.

In the light of this, the final commitment was for participants to map some of the crossovers as a way to develop a more coherent narrative through the Integration Syndicate process.

Listen to an interview with Prof Lamu on the role of the Kismet Cinema first aired on CapeTalk on 17 July 2017.