Close
Home News Forging theory with bite: A reflection on Vanessa Watson’s contribution to the African Centre for Cities

Forging theory with bite: A reflection on Vanessa Watson’s contribution to the African Centre for Cities

I met Vanessa Watson’s ideas before I met her in person. She co-published an article in 1996 about the complexity and fluidity of household structures in township and informal neighbourhood contexts that disrupted the simplistic assumptions in public policy and planning about how to advance “development.” I vividly remember how often I cited or referenced that article in my engagements with NGO networks and government policy circles whenever we were debating effective poverty reduction strategies. Development policy is often laced with paternalism and moralistic assumptions about the nuclear family and the availability of work if one displays the necessary fortitude. Such assumptions are of course extremely misleading and result in numerous negative unintended consequences. Vanessa’s article in Social Dynamics provided a searing critique of this kind of moralism but rooted in careful research and thick evidence.[2] This is indeed the hallmark of her scholarship: meticulous, evidence-based, ethically grounded and always with an eye on how to support the state or society to make public policy and planning better and more just.

Fast forward to 2021, and Vanessa is indisputably one of the top planning and urban scholars in the world, and certainly in the top five most recognised global South planning minds. It is not an overstatement to suggest that there is unlikely to be a single academic planning programme in any world region where planning students will not be expected to read her voluminous output and wrestle with her incisive criticisms of Eurocentric, mainstream planning theory that has been near universal in its erasure of indigenous thought and political systems. Her co-editorship of two seminal edited volumes in 2018 attests to her international stature and impact.[3] However, in this short reflection I want to focus on her pivotal role in the establishment and growth of ACC.

In 2005, Vanessa was part of a small collective of urbanists at the University of Cape Town that felt there was an urgent need to ramp up urban scholarship at South African universities. Through support from the National Research Foundation she convened a national conversation on the topic in 2005 and this fed into a UCT-specific exploration about how best to address the gap left with the demise of the Urban Problems Research Unit (UPRU), where Vanessa had cut her teeth as an engaged urbanist. At the time I was engaged with UCT in a part-time capacity teaching occasionally with Sue Parnell in the geography department, but was invited to participate in these processes. This afforded me a look-in on a series of conversations at UCT that led to the conceptualisation of a novel MPhil—the Urban Infrastructure Design and Management programme—supported by the Ove Arup Foundation. This initiative reinforced the need for an interdisciplinary research hub at UCT focused on the dynamics and challenges posed by rapid urbanisation in Africa. Vanessa, with support from the then Dean, Prof Cyril O’Connor, spearheaded a fundraising drive that created the platform for ACC to be formally founded in August 2007. I took up the role of founding director to figure out what exactly was needed and could be done at an epistemic moment that insisted, it was not only African urbanisation that mattered, but alternatives rooted in practices across the global South.

Vanessa formed part of the original Executive Committee of the ACC, and has also served on the Advisory Board throughout the past fourteen years, in addition to acting as Principal Investigator on numerous large-scale research projects. It is in these capacities that I have come to appreciate her formidable skills, capacities and passion. For students of her work it may come as a surprise, but Vanessa is not only a great scholar but a formidable institutional builder. In this role she can be counted upon to always be prepared, to read every line in a report or spreadsheet, to ask the tough questions, and to always be at the ready to support and cheerlead. She also understands the fine grain of the baroque sensibilities of the university with its obscure logics, enabling ACC to navigate numerous challenges. Importantly, Vanessa not only worked incredibly hard to strengthen the ACC, she was equally committed to making an amalgamated planning, architecture and geomatics department figure out how to co-exist and flourish. Quixotic work to be sure, but not a challenge that she was prepared to elide. If these institutional furrows are not enough, she also availed herself to take on various leadership roles in the Engineering and Built Environment (EBE) faculty during trying times.

In some ways her greatest institutional legacy is as a leader in the African Association of Planning Schools (AAPS) network. In the first year of ACC’s existence, Vanessa mobilised resources to convene the first AAPS conference. Due to severe resource constraints, up until 2008, AAPS had never been able to meet outside of global planning conferences, highlighting inequities between various member associations of the Global Planning Education Association Network (GPEAN). Since its inaugural conference in 2008, AAPS has grown formidably as the standard setter for what a decolonial planning education could look like in the African context, as well as experimenting with novel epistemologies and case study methods to generate indigenous resources for teaching and advocacy.[4]

Unsurprisingly, Vanessa’s generative theoretical oeuvre served as a vital inspiration for these conversations and the ongoing transformation of planning schools and their curriculum. This empowered African planning scholars and students to confront the troubled and entangled nature of planning amidst informality and fractured statecraft.

There is so much more to mention and reflect on to capture the enormous contribution Vanessa has made to her discipline, the global and African institutional scaffolding of planning, international policy thinking, and of course, urban studies and criticism at UCT. It is fair to say that ACC would have been less visible, less influential, less coherent, if it was not for the indominable energy of Vanessa Watson. Most importantly, her understated way-of-being speaks to a unique grace and elegance with which she does her transformational work. In the wake of her untimely passing, her legacy will continue to soar.

1 Adapted from: Pieterse, E. (2021) in: Kumar, A., Ramesh, A. and Watson, V. (eds.) Vanessa Watson. Planning from the South. Learning from Academic Praxis and Activism. Association of European Schools of Planning. 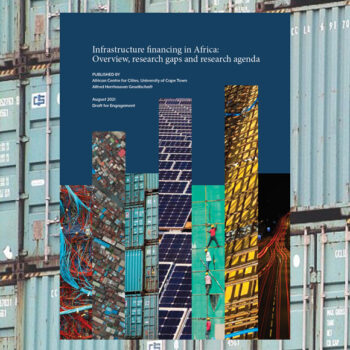