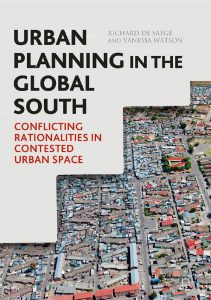 How different does planning theory and practice need to be when it happens in different parts of the world? To what extent does planning require a deep understanding of the context in which it propose to intervene and how should this understanding shape what planners do? These questions challenge some long-held assumptions in planning where both theory and practice have tended to smooth over this kind of sensitivity in favour of concepts and practices which are place-blind and held to be valid anywhere in the world. The purpose of this book is to foreground the importance of recognising place and location in planing if it is to achieve the kinds of ambitions (social justice, and equity and sustainability) which it usual sets itself and avoid the unintended consequences which so often ensue.

The authors offer a Southern perspective on planning theory, explaining how the concept of conflicting rationalities complements and expands upon a theoretical tradition which still primarily speaks to global ‘Northern’ audiences. De Satgé and Watson posit that a significant change is needed in the makeup of urban planning theory and practice – requiring an understanding of the ‘conflict of rationalities’ between state planning and those struggling to survive in urban informal settlements – for social conditions to improve in the global South.

Ethnography, as illustrated in the book’s case study – Langa, a township in Cape Town, South Africa – is used to arrive at this conclusion. The authors are thus able to demonstrate how power and conflict between the ambitions of state planners and shack-dwellers, attempting to survive in a resource-poor context, have permeated and shaped all state–society engagement in this planning process.

Colin Marx, University College London, UK comments on the title: “Refusing to be drawn in by the universalising claims of planning theory, De Satgé and Watson are as attentive to the micro-politics of everyday life as to the global dynamics shaping the broader territory, offering new insights into the concept of ‘conflicting rationalities’. This book offers a springboard in the vital development of southern planning theory and practice.”