Close
Home Events Kigali and Rwanda: reflections on a capital city and its territory

Kigali and Rwanda: reflections on a capital city and its territory 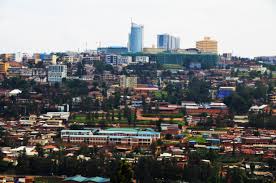 The ACC is honoured to welcome Professor Tomà Berlanda, an architect with extensive international academic and professional experience, to the Brown Bag Series.

Unlike other African capitals, Kigali has not been established as a city by a colonial power. Even though it was founded under German rule, it became capital only after Rwanda’s independence from Belgium in 1962, and until 1994 remained relatively small. The Belgian occupiers always remained hostile to the development of urban centres, because they attributed to Rwanda the main function of providing work force, to be employed in their other neighbouring colony to the west. During the first and second Rwandese republic, the growing concentration of bureaucratic and administrative functions did increase the number of inhabitants, without though giving rise to an uncontrolled expansion. During that time the government further attempted to consolidate the secondary urban centres, and moreover maintain an economic and social structure based on agriculture.

From the end of the 80’s onwards, though, following the introduction of the structural adjustment plans and the dismantling or privatisation of state owned industrial plants, that approach has been left. Today, urbanisation has become an intentional strategic goal of government policies, and, together with land tenure regularisation and the growth of private led industrialisation, this has a huge impact in the re-design of the entire territory. In official documents this transformation is considered a goal to be pursued and encouraged through the reorganization of agricultural activities, the concentration of investments in urban centres, the adoption of measures aimed at moving and grouping population. This direction is apparent in policies and programmatic indications at national level and is further confirmed in documents at the local level, from district plans to master plans.

The territorial imbalance in growth between the capital city and the rest of the country is a reason for concern, and is at the same time the result, and an indication, of global phenomena and local circumstances. Furthermore, it highlights the need to consider Kigali’s evolution in close connection to all that of the Rwandese countryside. Not only because of the migration of population, but also because the establishment of a “competitive city in the global market” such as is conceived and pursued today requires massive investments and a gigantic drainage of resources. At the risk of resulting in a macro-cephalous capital detached from the rest of the country.

Born in Venice, Tomà Berlanda is an architect with extensive international academic and professional experience. As of April 2015 he serves as Director and Professor at the School of Architecture, Planning and Geomatics at the University of Cape Town, where he pursues his research interests focusing on the implications that can be drawn from a non stereotypical reading of the African city and the practice of architecture in non- Western urban settings and landscapes. This follows upon his position as co-founder of asa studio in Kigali (2012-14), where he led an extensive design and build campaign to provide community based early childhood and health facilities across Rwanda. The award winning work has been published widely, and included in the Afritecture: Building Social Change (2013) and the Africa: Architecture, Culture and identity (2015) exhibitions.

He has held teaching positions at various institutions, and has been Assistant Professor at Syracuse University (2009-10), Visiting Critic at Cornell University (2012) and Senior Lecturer at the Kigali Institute of Science and Technology (2011-3). He has been member of the editorial board of rivista tecnica, Lugano, and a regular contributor for de Architect, den Haag. He holds a Diploma in architecture from the Accademia di architettura in Mendrisio, Swtizerland (2002) and a Ph.D in Architecture and Building design from the Politecnico di Torino, Italy (2009). He is the author of &quot;Architectural Topograhies&quot; (Routledge, 2014), as well as number of articles and chapters in international publications.