The Annual ACC Seminar & PhD Course on Democratic Practices. Contact Henrik Ernstson by 6 May 2016 if you are interested in attending. We have 14-18 seats. For more information, keep reading!

The Aesthetical and the Political of Unequal Geographies:

The seminar is given by the African Centre for Cities (ACC) at the University of Cape Town. To apply, please send  your letter of interest no later than 6 May 2016 to Henrik Ernstson (henrikDOTernstsonATuctDOTacDOTza). We hope the seminar with its readings and discussions can contribute new angles and perspectives to your research.

More information on the 2016 theme, reading and seminar methodology is given below. 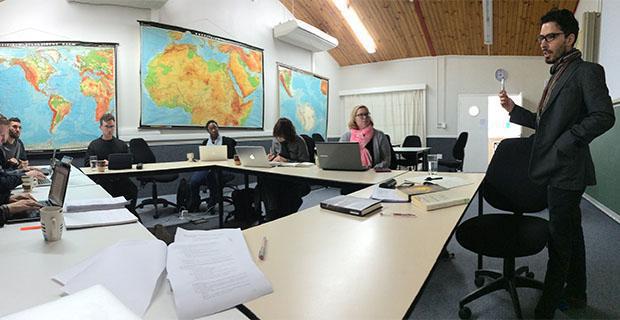 Andrés Henao Castro leading the seminar on democratic practices and unequal urban geographies in 2015 at UCT.

Rationale for 2016: Aesthetics and politics!

The task is urgent and profound: How to make sense of rapid urbanization across Africa and the global South, while (re)turning to explicitly think about emancipatory politics? What does the political mean in these contexts? What constitutes properly democratic practices of equality and freedom? What can we learn by rubbing political theory against urban studies of ‘the South’?

This annual seminar series emerges out of an interest to put into conversation political philosophy and global south urbanism. Importantly, our objective is not that of supplementing a theoretical abstraction (e.g. ‘the political’) with some kind of concrete spatiality. Rather, we are interested in the global south as an epistemological position and a field of experience that has specific contemporary sociomaterial realities that we hope can trouble and re-new both radical urban theory and political theory. Following last year’s seminar, in which we related our readings of Plato to Rancière with critical urban studies of the South, this year we gather a seminar that problematizes the relationship between the political and the aesthetic. This puts more focus on artists and activists that intervene materially and socially in the fabric of urban spaces, and it brings us towards the political in a quite specific way.

More concretely we aim to relate questions around what Jacques Rancière calls the distribution of the sensible with interventions in urban spaces. We aim to push the seminar to think about the representation and troubling of an aesthetic regime from the perspective of how it has become embedded in urban and non-urban settings. We will exploit texts that have linked theoretically the political with aesthetic regimes and how this translates troubles and can be re-thought in the context of the global south. We want to ask, for example:

In light of 2015 and the student movement of South Africa, questions of democracy, decolonization and profound emancipatory change have brought these questions into even sharper focus. And this does not mean to forget other recent women, workers and community rebellions, nor the slow-grinding and incremental institutional changes of empowerment that is also ongoing. Indeed, we hope this seminar/course will provide a chance for all participants to think about these recent events and processes. We hope it will contribute material and discussions through which you can re-think and sharpen your own research projects.

Our seminar focuses on readings of political theory that interrogate the relationship between the aesthetical and the political, across a variety of philosophical approaches. Yet it explores such relationship with a particular and rather unusual emphasis on urban and non-urban geographies of the global south. We want to discuss questions about representation, intervention, performativity, sensuousness, visibility, audibility, occupation, inscription, by placing these theories within uneven geographies that should trouble existing theoretical findings and help us to reformulate our research questions, methodologies approaches and theoretical assumptions. In the readings we have chosen to place more emphasis on political philosophy as these are less known to most of us, and since this makes best use of Dr. Andrés Heano Castro’s visit here at ACC in Cape Town. The texts on global south urbanism will bring in contextual and theoretical aspects into the seminar, but we also rely on participants’ wider readings and their own research on urbanization, global south and decolonization. Below you will find the current list of readings, which will be updated.

We will meet for 3 hours every day. Andrés will talk for the first 30 minutes, in order to provide context for the theoretical discussion: what is at stake in the texts, where does the text stand in relation to intellectual debates, and summarize main points, etc. Then we open the floor for discussion in which the global south urbanism literature will enter as ways to unpack and think about the seminar questions, how our empirical work are helped by these texts, while challenging them and ‘speaking back’. Through this we will have a chance to re-think our own research and case studies. For each day we will provide questions to orient your reading, and serve as starting point for our discussions. Based on this you can write down and raise your own questions to further give direction to the seminar. We will have a short 10 minute break two hours into the seminar and then we will return for another 45 minutes of discussion. Coffee and tea will be served during the seminar. (NB: Global south urbanism reading and questions will be complemented later alongside points 1-3 in the list below.)

The seminar/course is open to PhD students and scholars. Please send an e-mail to Henrik Ernstson no later than 6 May 2016 including a 500 word motivation letter (why you would like to take this course) and a 2-page CV (not longer please). We will have between 12-18 seats available. You will know if you have been accepted a week after.

There are no course fees. During the seminar there we will arrange coffee and tea every day, and one dinner. The rest of food items and other costs will be on your own account.

Short on the organizers

Dr. Andrés Fabián Henao Castro is Assistant Professor of Political Science at the College of Liberal Arts at the University of Massachusetts Boston. His research interests are the relationship between ancient and contemporary political theory, particularly in reference to democratic and de-colonial theory and practices, the question of political subjectivity and the distribution of political agency. Currently he is working on a book that explores the kind of subject-positions and forms of agency that are imagined and unimagined in the theoretical reception of Sophocles’ tragedy Antigone. As a member of the international research network on Performance Philosophy he is also developing a new project on radical interpretations of Plato’s allegories. He is also working on the relationship between text and textile by putting in conversation ancient and contemporary political weavers through their reception in contemporary feminist theory. Read more on his website: http://works.bepress.com/andres_fabian_henao_castro

Dr. Henrik Ernstson is a Research Fellow and Principal Investigator from the KTH Royal Institute of Technology, Stockholm, and an Honorary Visiting Scholar at the University of Cape Town, where he has been since 2010. His theoretical and empirical work is focused on the politics and collective organizing around urban ecology, from urban land and wetlands to waste and sanitation. With others, he is developing a situated approach to urban political ecology drawing upon upon critical geography, global South urbanism, postcolonial theory and postfoundational political thought. For more information, see http://www.situatedecologies.net and http://stanford.academia.edu/HenrikErnstson.

Dr Henrik Ernstson is a lecturer in Human Geography at The University of Manchester. In 2018 he was appointed an Honorary Associate Professor of the African Centre for Cities at the University of Cape Town.
View all posts by Henrik Ernstson
STOMPIE: A Performance
Job Opportunity: City Embedded Researcher: FRACTAL Cities and Climate Change Project